Squirrels are members of the rodent order and are distributed on virtually every continent. The squirrel family (Sciuridae) is composed of some 285 species globally. Britain is home to two species: the Eurasian red squirrel (Sciurus vulgaris), which is widely considered the native tree squirrel species here, and the eastern grey squirrel (Sciurus carolinensis), which was imported from the United States of America in the late 1800s. 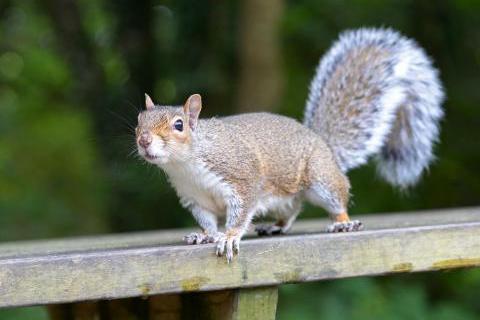 A tree-dwelling rodent native to North America, Grey squirrels were introduced to Britain in the 1870s and have increased in range and number significantly since.

Red squirrels are tree-dwelling rodents and the only squirrel species native to Britain. A popular species of British wildlife it has declined significantly.

Squirrels can be highly destructive and difficult to house-train making them a poor choice as a pet.

Is it okay for me to feed wildlife?

Generally speaking, feeding appropriate food in appropriate quantities is fine. There can, however, be some unforeseen consequences to supplementary feeding.

I’ve rescued a Grey squirrel. Can I release it back into the wild?

Grey squirrels are considered invasive in Britain and rescue centres can only be released under a license from Natural England.

What controls the caching behaviour of squirrels & how do they find their buried nuts?

Caching is innate for squirrels and their caching behaviour is affected by the environment and potential thieves. They have a good spatial memory that allows recovery of upto 95% of cached nuts.

What is squirrel pox & when did it arrive in Britain?

What’s the story behind the Grey squirrel in Britain?

The first Grey was introduced to Britain in 1876 and, since then, successive introductions have seen the population become established across much of the UK.

Why are some squirrels of the same species different colours?

Genetic diversity among squirrels results in, sometimes extreme, variations in the deposition of the pigment melanin in fur as it grows, resulting in black, white and grey animals. They are all the same species, however.

Why is the Red squirrel declining in the UK & what can be done?

A combination of habitat loss, out-competition by Greys and the spread of an often fatal virus are all factors in the Red's decline. A broad-scale approach to managing Greys and forests is needed to address the decline.